or request a quote for your study

16S rRNA gene sequencing, or 16S amplicon sequencing, is performed to determine the relative abundance of taxa in a bacterial community, and to compare between groups of interest. This level of analysis can help to address changes in the overall microbial profile over time, or between treatment groups. We have two 16s rRNA primer options available:

We suggest speaking to a Microbiome Insights representative to better understand the pros and cons of each primer region to determine which one is best suited for your study.

Our 16S V4 and 16S V1-V3 workflow from DNA extraction, library preparation, sequencing and report generation have been accredited by the College of American Pathologists (CAP).

ITS2 rRNA gene sequencing, or ITS2 amplicon sequencing is performed to determine the relative abundance of taxa in a fungal community, and to compare between groups of interest.

See all our microbiome sequencing services.

DNA is extracted from samples using the Qiagen MagAttract PowerSoil DNA KF Kit (formerly MO BIO PowerSoil DNA Kit) optimized for the Thermofisher KingFisher robot. This kit uses magnetic beads to specifically capture DNA while excluding organic inhibitors. In-house testing has shown that this kit has a good balance of DNA yield and quality, as demonstrated on a variety of environmental sample types.

DNA quantification and quality checks are done via Qubit.

We use the high-fidelity Phusion polymerase for amplification of 16s and ITS2 marker genes. If extractions contain some carry-over inhibition or a high concentration of DNA, typically we test 1:1 and 1:10 dilutions and run the PCR products on gels for verification. PCR is done with dual-barcoded primers (Kozich et al. 2014) targeting either the prokaryotic (16S V4, V1-V3) or fungal (ITS2) regions. Our barcoding strategy enables multiplexing up to 384 samples per run. PCR products are verified visually by running a representative subset of samples on a gel. Samples with failed PCRs (or spurious bands) are re-amplified by optimizing PCR conditions. The PCR reactions are cleaned up and normalized using the high-throughput SequalPrep 96-well Plate Kit. Samples are then pooled to make one library that is quantified accurately with the KAPA qPCR Library Quant kit.

Library pools are sequenced on the Illumina MiSeq using the corresponding primer sets for either prokaryotic (16S V4, V1-V3) or fungal (ITS2) regions.

Certifications: All of our 16S & ITS2 amplicon sequencing services are performed in a College of American Pathologists (CAP) accredited laboratory. 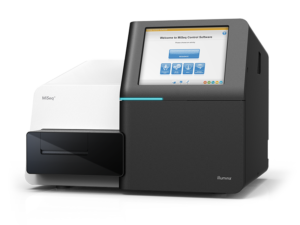 Our bioinformatic pipeline for 16S and ITS2 can accommodate different experimental designs. We have the capacity for microbial marker discovery and machine-learning-based modeling. Our main pipeline uses Mothur (Schloss, 2009) for processing amplicon data. We also have experience working with DADA2 and QIIME.

Learn more about our bioinformatics services.

Advanced bioinformatic reporting may include:

Pedro Dimitriu, Senior Director of Bioinformatics at Microbiome Insights Inc., provides an overview of generic amplicon workflow and distills the main concepts that underpin the process, as well as an overview of mothur workflow. In the video, Dr. Dimitriu also discusses taxonomic classification, as well as the features and examples of classifiers.

New Microbiome Insights clients commonly ask how they’ll receive their data. As part of our 16S sequencing services, we transfer the raw data file to you. In addition, if you take advantage of our bioinformatic analyses you’ll also get a customized report that makes it easy to see the information most relevant to your study question.

Which amplicons do you run?

We can address taxonomic profiling for prokaryotic communities (16S V4, V1-V3 or V4_skin) and fungal communities (ITS2) on the Illumina Miseq using the version 3 chemistry.

Why do some labs select other primers?

Each primer has its pros and cons, so the primer you select depends on the aims of your particular study. 16s V1-V3 may produce better classification for skin microbiota; conversely the 16s V4 region is less suitable for skin taxa and classification. The 16s V4 region, however, produces an amplicon length that is more suitable for short-read sequencing, which reduces sequencing error.

How many reads do you get per sample?

We recommend against over-sequencing as it inflates the number of spurious OTUs. The more reads that come out of the sequencer, the more likely those reads will create spurious OTUs.

We would generally not recommend omitting samples with low reads as there may be biological factors at play. Course-grained comparative analyses (e.g. beta diversity) are relatively robust to low reads.

Ready to send us your samples?

For information on sample collection, storage and transport please see our support section.